Skip to content
This is Karl der Grosse now, he has been ‘free’ living like a wild tortoise in what we call Karl’s land, next to our land, but it is wild there. We gave him his freedom last October in 2015, he came to us as a few days old baby tortoise close to death, as it had been hot for days. We did not know much about tortoises yet, although we knew that they lived on our plot of land, very shy of course one could hardly see them with all the plants, weeds and trees growing there.
It was heart-wrenching to put him out on 2nd October 2015, would he survive? We have nurtured him from so young, he had lived with us in a big box shaded from too much sun yet we took him out for a walk… he loved his clover patch which covered him almost, we sat on a stool keeping an eye on him, as there were cats around, he was not safe!
In the photos above one can see him with his favourite tomatoes, juicy, lettuce of course and I gave him some soft peaches, yummy.

We learnt much about tortoises in these years we have lived here. When we set him and Pru his lady and the little baby tortoises who had been given to us free, James arranged a feeding station for them and also a container so they had something to drink. We kept an 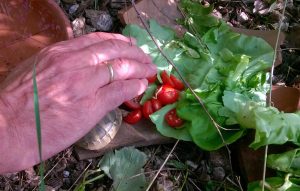 eye on them and continued to top up their lettuce, strawberries… and other and of course the water, not regularly so they did not become reliant on us, it
worked! The pictures on the right speak for themselves.
A Hermann’s tortoise’s diet consists of vegetation. Good foods include dandelion, clover, honeysuckle, leafy salads, watercress, curly kale, brussel tops, spring greens, coriander, parsley, rocket, carrot, parsnip, courgette and bell peppers. The bulk of the vegetation should be leafy greens.

The boys are doing well, Malcolm and Liam have taken to lettuce, tomatoes are juicy and they love them. I have added parsley, kale and when I can find some clover which has not dried up. I am growing weeds…, carefully watering them, to eventually add those to their diet. They love their sunbathing, so they are getting their UV naturally without those lamps one needs in the UK. Time is moving on, July is really hot not a drop of rain in site, clearly not until early September we are lucky. It is July the 15th 2013, the weather is very hot about 37 degrees going up now in the latter part of July and August to above 40 degrees C. Rain, well there has been little to almost none since May, we had a drop yesterday with a thunder cloud passing by.

1,108 spam blocked by Akismet
Scroll Up